TEACH-IRAISE UP! AND THE CONTEXT BEHIND THE BOOK

By - Ilá Coimbra* and James Taylor** 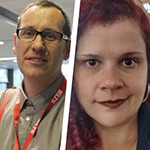 When we decided to write Raise Up!, we had a simple aim in mind: to create a mainstream English language coursebook that included a more accurate representation of the world we live in. Our experience as language teachers and teacher educators has showed us that although there has been some progress towards including a wider range of people in coursebooks, this progress has been slow and it is seen mostly in local materials. This means that there is still a lot to do worldwide in order to make classroom materials more inclusive and more representative, and this was why we started to write Raise Up!

The groups that we identified as being the more underrepresented, if represented at all, in mainstream materials are

Some of these groups can be found in coursebooks, but they are usually seen as stereotypes. Older citizens, for example, are normally depicted as fragile citizens whose lives and happiness depend on taking care of their grandchildren, whereas disabled people are mostly portrayed as fighters that have succeeded in life despite their condition. Non-conventional body types are rarely seen positively, and the LGBTQIA+ community is noticeably completely absent. Also, non-hegemonic countries and cultures are more often than not seen through the eyes of tourists or explorers, rarely having their own voices expressed. What is clear is that there is massive room for improvement.

Key principles that informed Raise Up! As we said before, the aim of the book is to promote the idea that coursebook representation is important and must continue to improve. Our focus is not on critiquing what has come before us, nor are we stating that this is the only way to write inclusive materials. We do acknowledge progress has been made and that there are some books that bring a more accurate representation of society to the ELT classroom.

Having said that, we do believe that considerable progress needs to be made. The key principles that have informed the writing of this book are:

How the Raise Up! works
Raise Up! is an e-book that can be bought at https://taylormadeenglish.com/raiseup/. The lessons have been created for a variety of levels and are suitable for teens and adults. They are not designed to be used concurrently, rather as individual lessons chosen by the teacher for their class.

Buy Raise Up! and contribute to an important cause
All the money we make with this book will be donated to Casa 1. Casa 1 is a shelter for young members of the LGBTQI+ community that were kicked out of their homes because of their sexual orientation or gender identity. There are many projects inside Casa 1, such as English to Trans-form, which offers free English lessons to Casa 1 dwellers, as well as to the black community and women in situations of social vulnerability. Among the courses offered to this community are dancing, sewing, hairdressing and makeup, self defense, and music lessons.

More information about this project in Brazil can be found at:

Bibliography
Norton, B. (1997) Identity and the Ownership of English. The TESOL Encyclopedia of English Language Teaching, (1-6), (2018).

* Ilá has been an English teacher since 2001 and a teacher trainer since 2011, especially preparing students and teachers for language exams. Ilá holds DELTA Module 2, CELTA and CPE certificates and has been attending and presenting at local, national and international conferences since 2014. She is also one of the founding members of BRAZ-TESOL Voices SIG, an special interest group that focuses on equality in ELT.

** James is a DELTA qualified EFL teacher, teacher trainer, materials writer and podcast producer based in Brasília, Brazil. He has taught English to adults and teenagers in Brazil, South Korea, Belgium and Costa Rica since 2007. In August 2018, he self-published his first ebook, entitled “How Was Your Weekend?”. He produces the ELTON nominated TEFL Commute podcast.