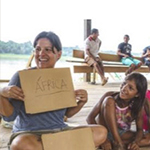 Every time I step on her doormat, Bia welcomes me dressed up in a different costume. Sometimes she is a ballerina with a beautiful light pink dress and white flitter. Other times, she is Anna from Frozen. Once, she had an AC DC, the famous British rock band, t-shirt on and when she looked at me shouted "rock and roll!". Today she was "just" Bia, a happy 3 year-old little girl with the entire world in her hands.

Carlos likes to dress up like his favorite superheroes. One time, he insisted that I was the Pink Power Ranger and made me a "super duper powerful laser shotgun". Although I dislike weapons, this one in particular had an incredible capacity of eliminating villains like "the bad humor guy", "mommy's look when I forget to wash my hands" and "bad weather day Man". The 4 year-old buddy is starting to understand that the good and the bad are part of our daily lives, and that we have the power to go through the day.

The best coffee you can have in São Paulo is made by Maya. The 2 and half year-old places teapots, cups and spoons by the border of the pool and listens carefully to her customers' orders. She's delighted whenever they "drink" it up.

Bia, Carlos, and Maya are all acquiring important life skills they will use as they get older. Playing dress-up with costumes and props takes children into the roles of others, whether real or imaginary. It helps them to learn about the world, appreciate others’ perspectives and feelings. This kind of play can be described in various terms, including sociodramatic play, pretend play, imaginative play, fantasy play, symbolic play, and role-play.

When we consider using this rich scenario as a means of our lesson plans, it is valuable to say that kids repeating dialogs helps them build vocabulary and language skills. Not only that, but when a child engages in make-believe, he/ she takes on a role of someone else, imitating actions and speech from earlier observed situations and incorporating them into his/ her play.

One of her main conclusions was that advantaged children had better speech. During her observations, she could notice that they participated more in sociodramatic play than disadvantaged children and tended to speak more, in longer sentences, and in longer utterances, use a higher percentage of nouns, adverbs, and numbers, use fewer adjectives, conjunctions, and pronouns, and have a richer vocabulary. [1]

But why? Why were advantaged kids able to embrace fancier dialogues?

The problem seemed to be that children coming from disadvantaged homes had not received sufficient adult attention and personal communication. These children did not have the experience and the skills to start complex pretend play.

Smilansky judged that the lack of adult attention and personal communication put the children at further disadvantage when they entered the school system, because they lacked the skills that their peers had been able to develop through play. She concluded that sociodramatic play promoted:

By understanding how children play and the importance of role play in their lives, we can help them not only learn a second language, but also improve their social and intellectual skills.

There is no such a thing as a bad time to play!

Paula is an educator and a specialist in Social Innovation, a fellow of the Amani Institute in Nairobi, Kenya. She has more than 10 years of experience dedicated to Sustainable Development in the field of non-formal education. By the end of 2016, founded Children's Time, an initiative of her own design. With extensive knowledge in creative learning, she is part of NELIS - Next Leaders' Initiative for Sustainability, an international network of professionals working on Sustainability and with whom she has been invited to hold workshops on non-formal Education in Tokyo and in Kyoto, Japan. Paula has worked on several educational projects in riverside communities in the Amazon Forest and accumulates a range of educational experiences, both in Brazil and abroad, as a volunteer at CISV, an international educational non-governmental organization. Her first job was as a teacher in Red Balloon.